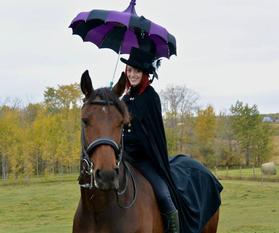 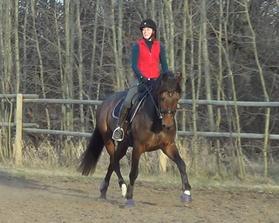 My addiction to horses began essentially when I was born and gifted a stuffed unicorn.  Little did my parents know what they had begun.  My aunt helped foster my addiction by giving me fixes at the barn she worked at, and since then there has been no going back.  I’ve since had the privilege of riding with many instructors around the world, from the Edmonton area (my intro to the hunter world), to Texas (my conversion to dressage), Japan, Spain, and Edmonton!  Somehow in all that I got stuck eventing, but I will claw my way back into dressage soon enough.

It has been a long journey of improvement since I bought my 2007 Westphalian Lamora in 2011.  With Amberley’s help, we’ve reached many big milestones, including (but not limited to) almost perfecting our halt, and finally doing a successful third level test!  I’ve also met my archenemy, tricked everyone into thinking I have lovely cross-country rounds while desperately trying to prevent Lamora (aka. Pony) from galloping off into the trailers, and achieved my goal of riding around in a cape and sword (yes, literally).  Pony has turned into quite a fantastic partner, and I look forward to inspiring fear in the hearts of our enemies.  You know, unless Pony and my dog Aki plot to overthrow me together at the next show.